I know I do not have a lot of stuff yet, but already I was wondering about and new way of storing my punches. My current system was just an old CD holder and the punches were sharing with my inks and my Spellbinders. 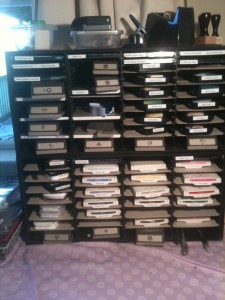 I thought is would take much longer to out grow this, but as you can see it is already full.

I also had a chance to get some more copic markers. My current storage for them was just an old oval tin that originally had chocolate fingers in. This was great when I only had about 20 markers, but when I doubled that number it became problematic in more than one way. Firstly they only just fitted in the tin and I still had a couple more to come. Secondly finding the colours I needed for the blending resulted in having to empty out the tin all the time. Something had to be done.

Now like most crafters I would rather spend my budget on crafting toys than storage, so I need a good cheap workable option for both of these things. After searching the web I narrowed the options down to possibly adapting something from an office supplies store, or cutting down some down pipes.

The office supply holder looked so pretty and could work well with a few of them glued together, but was going to cost over $100. More than I wanted to part with on storage.

Standing in the hardware store, we were trying to work out which size downpipe we were going to buy and how we would stack them, when I turned around and found they had rectangle PVC down pipes. Now I am not a square corner girl but even I could see the logic in using this instead of the round pipes. So home it came and we cut and sanded and glued. 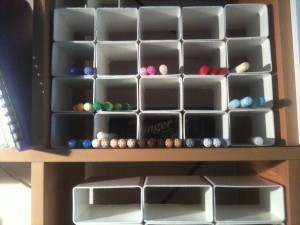 Ok so it is less than perfect but it works and is expandable. It looks a bit empty but over time I am sure that I will fill it more. Now while putting this one together I realised that this same concept could solve my punch storage problem.

Now one of the big problems with punches is the weight. I know many people hang them on a door in a shoe holder. The first problem for me here is I do not actually have a door to hang it off. I think even if I did I would not think modern doors would stand up for long to all that extra weight. A punch is heavier than a shoe.

The hardware store had the downpipe in two sizes, so we did the same thing with the larger size pipe. 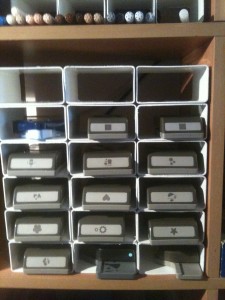 Cheap and expandable. I like my punches like this because it is no hassle to grab whichever one I want. I can see them all and the one I want does not have others stacked on top. The double layer of PVC is strong and since each on only has to hold up one punch, it should stay nice and sturdy.